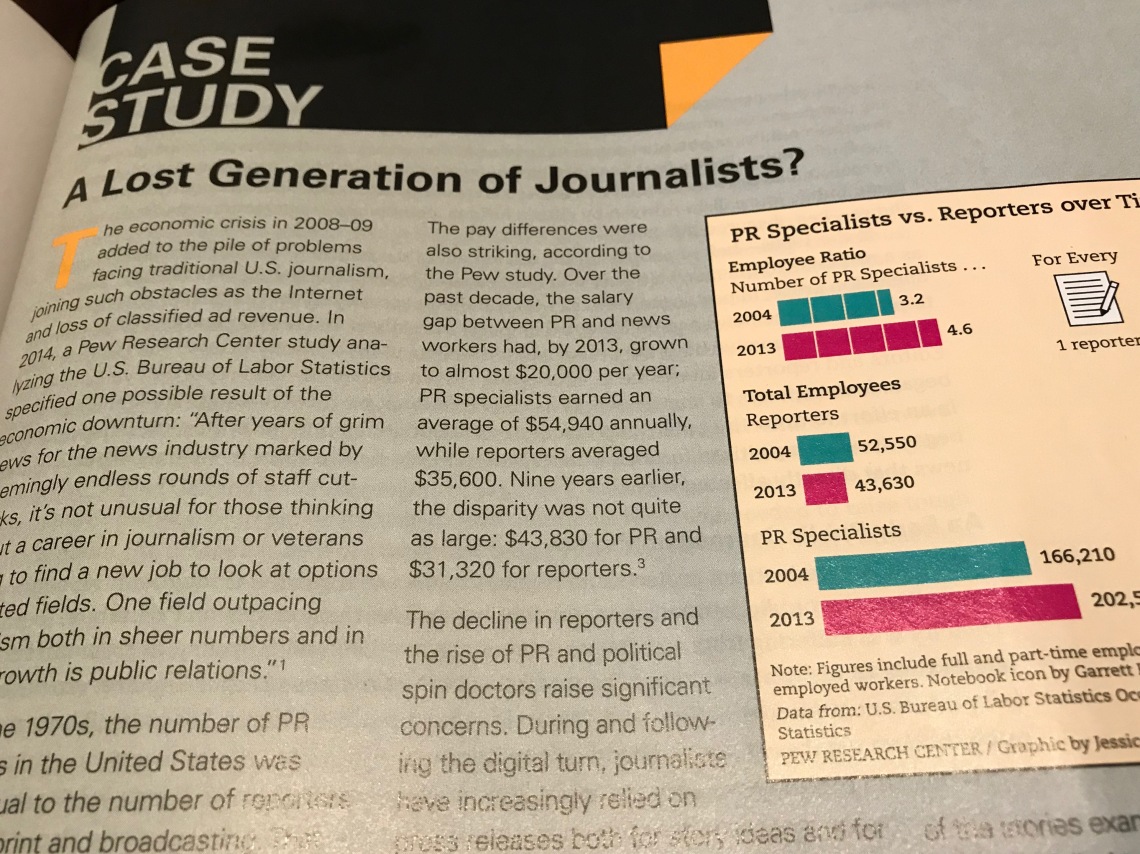 Of course we should care that public relations jobs are growing faster than journalism jobs, and that a tight job market in America’s newsrooms may be driving smart young people away from journalism. The result is a talent drain that deprives the public of vital information and insights that might help them become more informed citizens. Meantime, the voices of government institutions and corporations are getting louder, with the help of former journalists turned spokespeople and digital channels that let them circumvent the news media.

This is especially true at the local level, where most of the newsroom cuts are occurring. The national news media like CNN and The New York Times are still making money and aren’t cutting their headcount. Rather, they’re just reshuffling and reassigning reporters and editors to reflect how their audiences have changed in the move to digital.

Local news media, by contrast, have had a much harder time transitioning to digital; they’re losing ad revenue but not making up the difference with subscription or other revenue. So now many regions of the country no longer have even one daily newspaper, and the ones that remain are hanging by their fingernails. That often means there’s no one covering the local planning board meeting; there’s no one covering the statehouse; and there’s virtually no one holding local public officials and businesses accountable.

Many of the veteran journalists who have been displaced by this reshuffling have moved into public relations, including a good number of my former colleagues at The New York Times who, like me, have taken buyouts over the last two years. I don’t see that as tragic at all. Many of these people had long and distinguished careers in journalism, and now they’re having their second act, using their talent for telling stories in a different venue and making room for new kinds of journalists who are more attuned to the evolving way we’re telling news stories: visually, with data, and with real audience measurements behind it all.

All of that seems perfectly healthy. The Times has just about as many journalists in its newsroom as it had a decade ago; it’s just that more of those journalists are in untraditional roles like data visualization and audience development. The real crisis is occurring in small towns and even some big cities, where the atrophy of the news media is causing a dangerous imbalance between powerful institutions and those paid to watch them.

I am a journalist whose career has spanned Silicon Valley, Washington and Wall Street. These days I cover financial investigations as an editor at Bloomberg News. Before that I spent 11 years at The New York Times as an editor and reporter covering Wall Street and Washington. I also covered information technology in the early days of the Internet explosion and taught business reporting at George Washington University. I'm a graduate of Stony Brook University, where I advise my college newspaper on financial matters. View all posts by dsjoachim